This is me in India, nearing the end of a two month cycle trip. At that time I couldn’t imagine not cycling for miles every day; touring, commuting, to the shops, the cinema. I was ‘a cyclist’; a cyclist that couldn’t understand why everyone else wasn’t. And I wasn’t sure why we needed cycle lanes either.

Just over 3 years later I became pregnant, after 16 sad and painful months of not being pregnant. I was delighted and terrified in equal measure, knowing a fragile new life was inside me. I looked again with different eyes at the Edinburgh streets packed with cars and stopped cycling. I also didn’t drink alcohol, eat undercooked red meat, goats cheese or uncooked eggs. I ate more fruit and vegetables than was probably wise. I walked daily, in moderation, and even thought about pregnancy swimming and yoga (yes, I thought about it, I confess I didn’t actually do it). I could have been a cover girl for the NHS ‘Ready Steady Baby’ book. If there was a guideline, I followed it.

My pregnancy was perfectly normal and I felt fine, tired but ‘fine’. My husband and I did what lots of expectant parents do, we bought a house that needed extensive building work, where we knew no-one and had never even been before we viewed the house. I think the nesting instinct gets increasingly out of control the longer you leave parenthood.

My maternity leave was arranged, my cover sorted with a month handover. My boss and I were very pleased at how organised we were.

And then our son arrived 9 weeks early.

Everything explodes when you have a premature baby. If, like us, there is little or no warning, you are the exact definition of not prepared. No baby clothes, no birth plan, no nappies, no idea what has happened to you..

The NHS has my undying devotion for how it helped us through that night, and the weeks that followed.

The night he arrived was the most scared I have ever been. The fear that he’d not be ‘ready enough’ to live was almost overwhelming. Like many premature babies he was in a rush to arrive and he was born less than 6 hours after my waters broke. He weighed 3Ibs 10oz and was taken straight to the Neonatal Unit wrapped in a plastic bag. I read in our medical file later that he wasn’t breathing. Like most babies of his gestation he needed a CPAP machine to support his breathing and to be under a blue light to keep the (potentially dangerous) bilirubin levels under control. I wasn’t able to hold him until he was three days old.

For the first few weeks we were only able to hold him for a short period of time each day as his body temperature had to be kept stable. We learnt to feed him a few millilitres of my milk with a syringe connected to a tube in his nose. Every gram he put on felt like a significant step.

He didn’t seem tiny to us then, he looked perfect in every way. We look at the photos now and can’t remember him being that small, or at least we only remember it in fragments or in a particular moment. Parenthood alters your perception in every way, so perhaps it alters your vision and memory too.

A premature baby requires some complex coordination and planning: getting to and from the hospital, expressing and freezing breast milk every 4 hours, learning how to change miniature nappies inside a plastic box, learning not to become hysterical when the alarms and flashing lights attached to your child go off.

The Bliss booklet we were given was a great help, with lots of useful information to help us judge how our son was progressing. But the section ‘Saying goodbye to your baby’ made my stomach turn; how can any parent prepare for the death of their child?

The NHS was magnificent and provided us with the tools we needed to care for our tiny baby; the calm, professional, caring support gave us the balance between being prepared for challenges but hoping for the best. 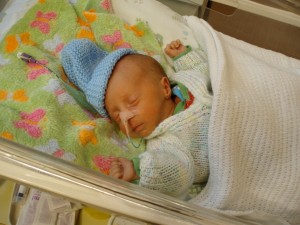 Our son spent five weeks in hospital, first in a covered incubator then in an open cot as he grew and became more stable. Each night I had to leave him, fearing that he’d cry out in the night for me.

He wasn’t quite 5Ibs when we took him home – we turned up the heating in our partly built house and settled down.

We stayed in lock down mode at home for the recommended 6 months, for fear of coughs and colds or worse setting back our son’s progress. Only friends in the best of health were allowed to visit. I fled the greengrocers if someone sneezed.

When I became a parent I stopped being who I was, I became the parent of a premature baby. Everything was different for us, the ‘normal baby’ rules didn’t apply and I couldn’t imagine a time when I’d not say ‘but he was two months early’ every time someone asked how old he was. I washed my hands like a heart surgeon for months after we left hospital; contact dermatitis made my hands look like I felt.

A friend offered me a baby bike seat, which I rejected, horrified, as if she’d offered me a tiger. I couldn’t imagine ever cycling again.

It has taken well over a year for the fear and anxiety to start to lift. Our son has thrived and we’ve been incredibly lucky. My husband and I are not religious, but this experience has made us feel like someone/thing should be thanked for our good fortune. In a different time or place we might have experienced a very different outcome. We know that some babies leave a neonatal unit with many more months of hospital care ahead of them. And some don’t leave at all. Shortly after we came home with our son there was an outbreak of Pseudomonas aeruginosa bacterium in the neonatal unit in Belfast and three babies died.

At the start of this year I noticed some posters around town for the Dunbar Cycling Group, advertising family rides through the spring and summer. This was exactly what I needed to get me back on my bike, and cycling with my son.

We went out for our first ride in April and haven’t looked back. We’ve ridden regularly with the group, gaining confidence in the crowd of other families. I’ve learnt to handle a bike, bag and baby so that the baby doesn’t fall to the ground, although I still can’t get us on a train without asking for assistance. My son loves being on the bike (for an hour or so, he’s not keen to stay still for long..) and our baby seat is on the front so I can talk to him as we ride. Primarily he enjoys pointing out the animals on our rural rides around East Lothian, although at the moment he’s under the impression they all make a similar noise – a cross between a sheep and dinosaur – which can be quite startling if I haven’t spotted them first. He also seems to find the whole experience quite relaxing so he often has a nap.. 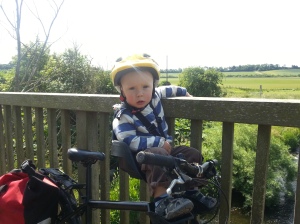 Becoming a parent has changed my view of cycling, and of the way I want to use the roads. I no longer want to fight for space with cars, I want my own cycle space away from the cars. I don’t want poor infrastructure that ends abruptly, spewing us out into the road. I  want to feel safe for the whole length of our journey, knowing that car drivers won’t be trying to squeeze by, brushing my son’s little feet.

We need to equalise the power on the roads by giving bikes, cars and pedestrians their own space. I’m no urbanist or infrastructure expert, but as a parent I know now you won’t get the cycling modal share that Amsterdam and Copenhagen have without their commitment to high quality infrastructure. There are lots of other barriers to cycling – confidence, health, culture, knowledge, money, the weather – but safety is the key.

Our family holiday to Denmark was a perfect lesson in how to create and maintain a cycle culture where everyone feels safe on a bike. The biggest threats I felt was from tourists who stumbled into the cycle lanes and from other cyclists who weren’t impressed by my leisurely pace.

My son regards sitting still (and sleep) as the enemy so we’ve never covered more than 20 miles together in one go, but as I thought we’d never leave the house at one point, this is a huge achievement.

We’ve bought a bike trailer for longer rides in gruesome weather and a balance bike is wrapped ready for his birthday this week. Even my husband has been tempted out on his (neglected) bike with us. It might have taken me a while to get from incubator to bike trailer, but I’m delighted to finally be a #cyclingfamily.

Finally, in case I never get to give a Nobel speech..

Friends, colleagues and family have been been a huge support in the last two years, but I want to thank the following in particular:

The midwife who was with us throughout my labour, who was so kind to us in our terrified and traumatised state. I’m so sorry that I don’t remember her name.

All the neonatal nurses at Edinburgh Royal Infirmary, who cared for our son 24 hours a day. Their kindness and professionalism reassured us that he was getting the best possible care, which allowed us to go home at night and sleep.

Magda, our neonatal paediatrician and Hilary, our neonatal physiotherapist, have been a huge support over the last two years. They’ve always had time to discuss our concerns and have made us feel like people, not an NHS number. In January we will say goodbye to them, as we’ll be signed off from the prematurity service. We’ll never forget them.

Within days of our son’s birth we enrolled in a epigenetic study, lead by Dr Chinthika Piyasena, looking at the long-term health outcomes of premature children. Chinthika provided great help, advice and good fun, as well as giving us the opportunity to ‘give something back’ through her research.

Our local Lloyds pharmacy in Dunbar has helped us with every cough, cold and ear infection with genuine concern and care. Similarly, the Harbour Medical Centre staff have been superb, responding to our every phone call with calm compassion and sensible advice.

My friend Jane, who has walked with me through every joy and sorrow in my life since we were 8 years old. For everything you’ve done, ‘thank you’ is never enough.

My husband has been my steadfast support throughout. He took a 3 month share of our parental leave, allowing me to go back to work and start the process of becoming me again. A new me, as it turns out, but back on my bike with my new bike accessory, our beautiful toddler.

7 thoughts on “From incubator to bike trailer”