The festive season is upon us and Father Christmas is going to be performing miracles soon by putting inconveniently shaped bicycles down a whole load of chimneys. Unfortunately he won’t be visiting me this year so I thought I’d write of bicycles past and the people that helped me pedal them..

So, follow me back to a scary place – suburban Surrey of the early 1980’s…

Here is my sister, displaying the cycle chic of the time. Our dad taught us to ride a bike. It was a Raleigh Budgie and, having just looked at the prices on Ebay, I now wish we’d kept it. I don’t remember much about cycling then apart from a faint memory of the thrill of riding without stabilisers. My main aim in life at that time was to be a professional footballer and I think my sister and I were both fully preoccupied with lobbying for a ZX Spectrum Plus (which we got) and a kitten (which we didn’t get). 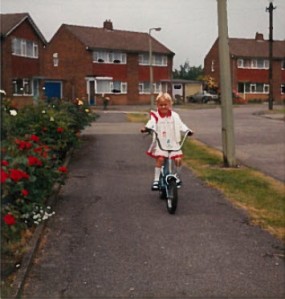 Cycling wasn’t really part of the culture of our bit of suburban Surrey. Not that there was much culture of other types either. My friend Esther had the only cultured parents I knew; they listened to Radio 3 and read the Guardian, which was unimaginably intellectual behaviour in our Daily Mail reading household. My mother cycled when my sister and I were small, but abandoned it when she learnt to drive. My parents encouraged me to learn to drive and bought me a car – a greatly beloved Datsun I called Gabriel, but it was older than me and cost £250 (before anyone suggests that Surrey is entirely covered in Range Rovers and stockbrokers). I did my cycling proficiency at middle school but clearly failed to grasp the point of the whole operation, as all I remember was the pleasure of escaping maths for a few mornings.

By the time I reached 23 I’d been through university, met plenty of people who rode bikes but not considered it as something I needed or wanted to do. Edinburgh was a walkable city, I was never in a particular hurry to get anywhere and the bus system was affordable.

At 24 I found myself back in the suburbs of South London, with a minuscule part-time salary and a cycle commuter boyfriend. Keen to share the cycle love, he bought me a bike – a Halfords Apollo – so I could cycle the few miles to work. It was a heavy mountain bike, not entirely suited to the role but it did the job and I started to think of myself as ‘a cyclist’. Yet somehow that bike fell into disuse; too heavy for my new 16 mile a day commute, it languished into a rusting heap in the back garden whilst I took the train. Something similar happened to the boyfriend.

I’m now forced to reflect on my scrounging ways as my next bike was also a gift. Enter my cousin Isobel and her unused, but perfectly kept, Raleigh ladies bike. The Raleigh gave me new cycle life, doing my, now shorter, commute with ease.

Then, nearly 10 years ago now, I met someone who didn’t give me a bike. He taught me to love the bike I had (someone should write a song about this).

Mark lived adjacent to the estate where I worked as a community development worker. Under the pretext of starting a cycling club together, Pollards Hill Cyclists, he showed me routes into central London through parks and low traffic streets. Mark took me through green spaces a few miles from my home that I’d never encountered before, he introduced me to the pleasure of riding in a group and the joy of feeling tired and mud splattered after a day riding in the autumn rain.

Mark showed me the joy and ease of cycling. I saw how it made life less complicated than using TfLs journey planner, how the purchase of a decent waterproof jacket could immeasurably improve your day and that it was acceptable (encouraged, even) to eat all the cake if you did 30 miles before or afterwards.

For the first time in my life, for my 30th birthday, I parted with my own cash to buy a bike.

It took me nearly 25 years from learning to cycle, to really loving to ride and it had nothing to do with being bought a bike, just some time and care to show me where and how to ride it. Merry Christmas.