2016 has been described as ‘an arse wipe of a year’ by one of my particularly insightful friends and I can’t muster the vocabulary to top that assessment. I’m not going to dwell on the heinous politics that has afflicted us this year – suffice to say it took a lot of effort to obtain my husband and I’m not pleased that some bureaucrat might try to deport him – but instead get on with a simple story about something that helped make 2016 slightly better.

This year our stock of cycling accessories has grown to include some serious Swiss engineering, a Follow Me Tandem, in an effort to combat the awkward ‘too big for trailer but can’t cycle more than 10 miles reliably’ issue that I knew we would face this summer. It enables me to connect my sturdy touring bike to my son’s Frog bike and haul him along, with or without any effort from him. It’s not a cheap piece of kit but, as the advert doesn’t go, not having a screaming child refusing to pedal one more metre in the pouring rain whilst everyone in the vicinity judges you – priceless.

I can’t comment on the technical aspects or issues with fitting it as I’m afraid I handed the box of bits, the bikes and £20 to a local mechanic on my way to work and came home to the whole lot working perfectly. The mechanic had experience of my botched repair efforts so he also sent me a stern email reminding me that the fixings must be checked and tightened with every use, which turned out to be a useful piece of advice that I should have adhered to more often.

The first tandem test was a mini cycling holiday down in Englandshire. After a couple of days of exhausting grandparents in Surrey we headed further south to the New Forest with my sister for a few nights so we could try out the fabled cyclists’ paradise.

Off on a tiny adventure by bike – New Forest here we come! pic.twitter.com/7MrUcvSFgq

The trails were lovely, although the gravel was tough for tiny legs at times, but getting between them was challenging at best and terrifying at worst. It was a shame to feel that cycling was relegated to a theme park activity that you should drive to, whilst the real roads remained the preserve of real transport – the cars. The Follow Me kept my son anchored securely and closely, but it was no match for one of the busy roads that we found ourselves on and I flagged down a passing cyclist (thankfully this turned out to be my sister returning from her much longer training ride) to cycle behind him until we could get off it safely.

On the trails, the Follow Me did the job I needed it to when the happy smiling child turned into an exhausted heap of moaning child and even the application of Skittles wouldn’t help turn the pedals. The hitch/unhitch process takes just a minute and can be done without the aid of a wall or helpful child, although it is easier if you have both, particularly when you have full panniers and a dodgy kickstand. When not in use, the mechanism hooks up (almost) out-of-the-way, although it does make your bike longer and I was prone to forgetting it was there and smacking commuters, tourists and lift doors with it. It does add to the weight, but it’s negligable when compared to a trailer and doesn’t attract the wrath of train guards on the lookout for prohibited trailers.

We headed back to London to enjoy our first Free Cycle, a glorious celebration of what cities could be like if you took them back from the cars. The only risk on the car-free roads of London that day was losing my speed demon in the throngs of other cyclists; he was cheered on by lycra-clad men who seemed delighted to see a small child speeding recklessly away from his fraught mother. The Follow Me was used to great effect as a tethering device once I’d caught him.. 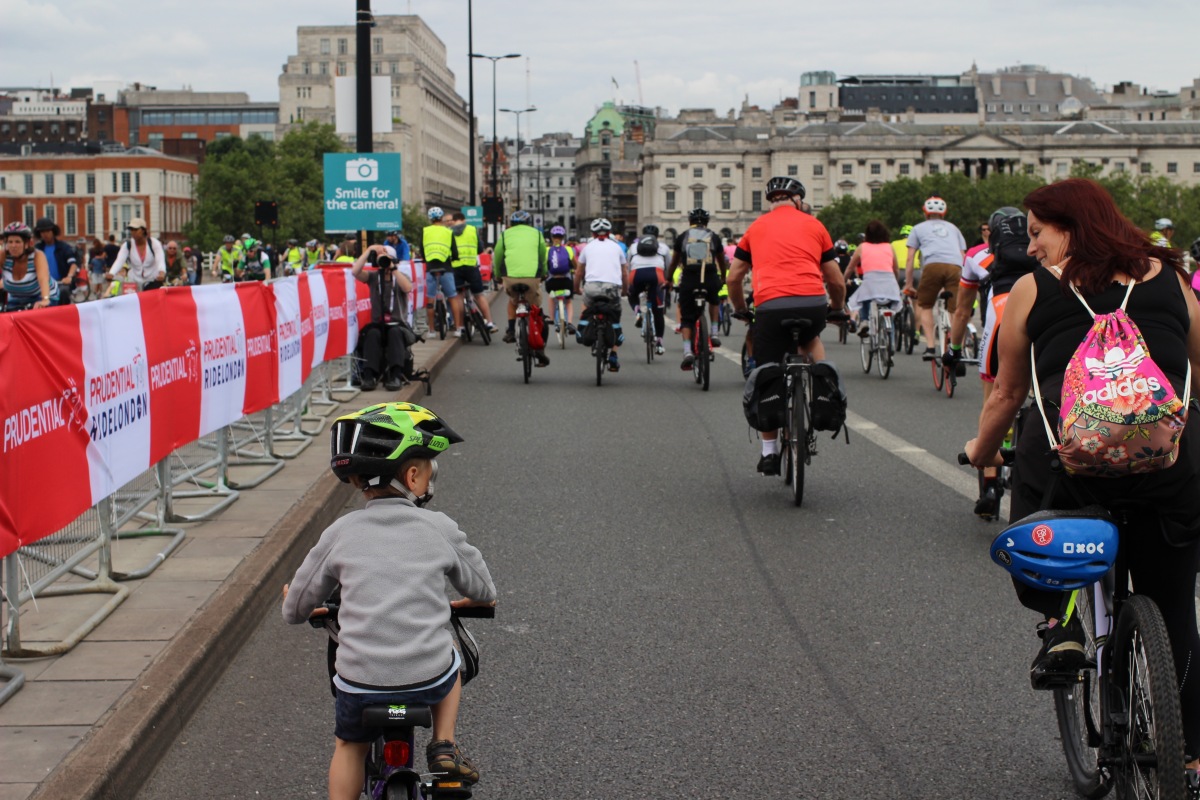 Back home in Scotland we had one last longer day outing with my child-friendly chum Claire, who wrote up our lovely day in Clackmannanshire. Here the Follow Me was used mainly on the final, perhaps unwisely challenging, West Fife Way to get us both back to Dunfermline station as tired little legs had already done around 8 miles under their own steam and weren’t going much further. Tiny little Clackmananshire has a circular route with some fantastic segregated sections that, like most of 2016, made me even more proud to call Scotland our home.

4 thoughts on “It takes two to tandem”