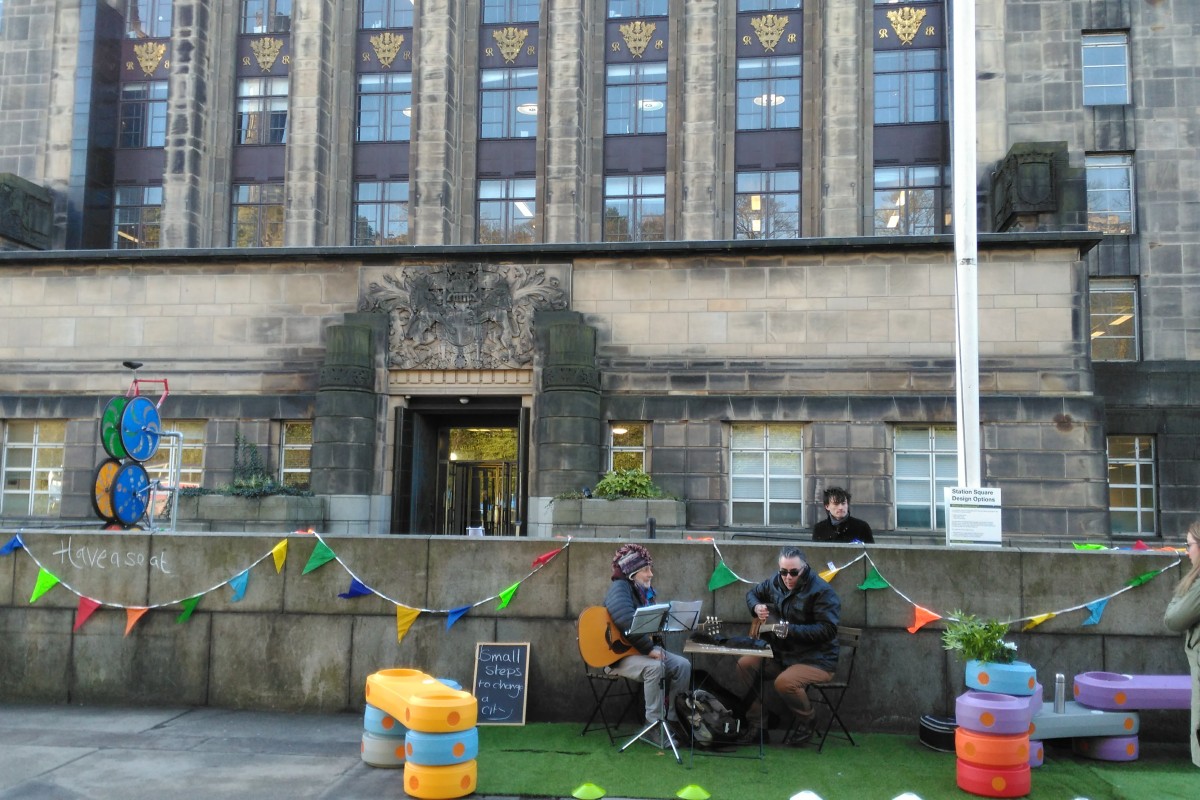 “We live in a time of massive institutional failure, collectively creating results that nobody wants” Ulab co-founder Otto Scharmer tells participants early on in the Theory U journey; he’s talking about global economics, politics, climate change, poverty and terrorism – the ingredient list for a planetary disaster recipe. As someone that regularly uses a bike it’s not hard to see urban street design in the failure cake we’re baking. All our policies talk about sustainable transport but our walk makes it clear where the power and investment has been.

We all want safer streets, reduced congestion, better air quality and communities where our children can play and roam freely yet we keep inviting more cars into our urban realm and expecting the results to be different from the ones we’ve seen before.

Its easy to feel despondent, just as it’s easy to blame the Council, the Government, developers, car drivers and sometimes the people that think 99% the same as you but not quite that last 1%. What’s hard is to engage openly, to act, to listen, to empathise with different view points and to change our minds when given new evidence. Sometimes its hard just to find the energy to have the conversation at all. We’ve seen that shouting ‘look at the Netherlands’ at politicians on Twitter is not having much of an impact, presenting evidence against bikelash agitators can produce a ‘fake facts’ standoff and powerful stories of change get dismissed as anecdotes. Short of taking everyone in Scotland on a weekend break to Utrecht, how can we give people a taste of what a people centred city might look and feel like?

If you can’t see it, you can’t be it: re-imaging the city

Officially, the Fire Starter Festival “is a two-week festival of collaborative learning events, illuminating creative, disruptive and innovative ways in which we can all transform ourselves, our organisations and the wider system” but it was sold to me when I heard it was all about “doing unusual things in unusual places and getting away with it”. I interpreted this as doing something naughty and not getting told off because the First Minister said we could do it.

Inspired by the Enrique Peñalosa quote “If we can build a successful city for children, we will have a successful city for everyone” we started thinking about road closures, play streets, street design competitions, film-making workshops with schools and forcing a ciclovia on Princes Street through the judicious use of toilet plungers and soft toys. Ultimately, our combined time and resources (close to nothing) meant that we settled for creating a pop-up park right outside one of Edinburgh’s most iconic Scottish Government buildings, St Andrews House.

Originally conceived as a legal method for reclaiming part of the street, and making a comment about how street space is utilised, pop-parks (or parklets) give a sense of how we could use our city streets if they were not consumed by the storage of cars. One of its originators has called it a gateway drug for urban transformation, which would explain why some Local Authorities have tried to prevent them. 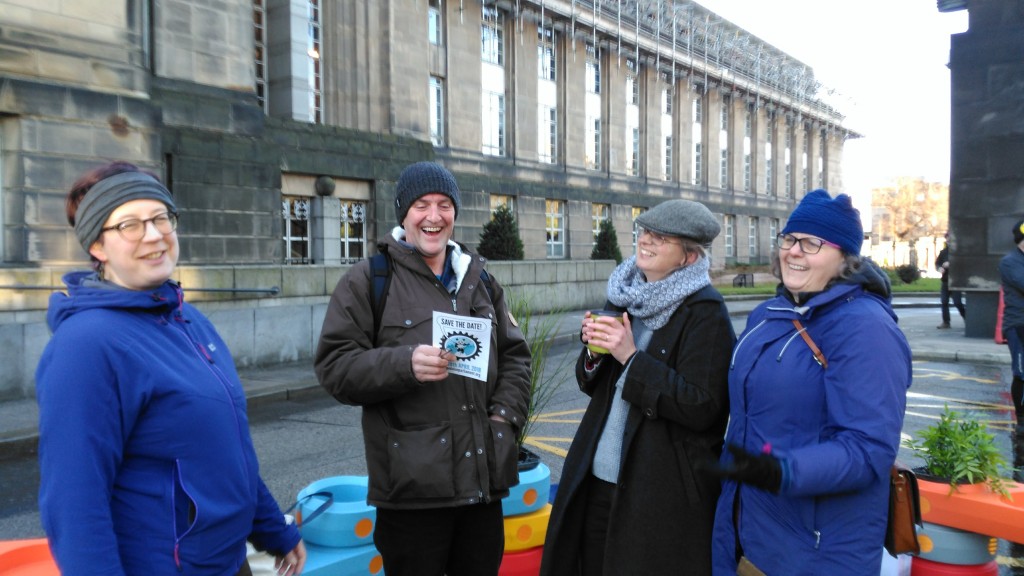 Outside St Andrews Day, on a bright but bitterly cold February afternoon, we had a programme to tempt people into our park. Musicians played, Dr Bike got out his spanner, people skipped, poetry was chalked across the walls and there was **not a Council entertainment license in sight** (yes, that’s the extent of guerrilla action that this former Head Girl can really take). 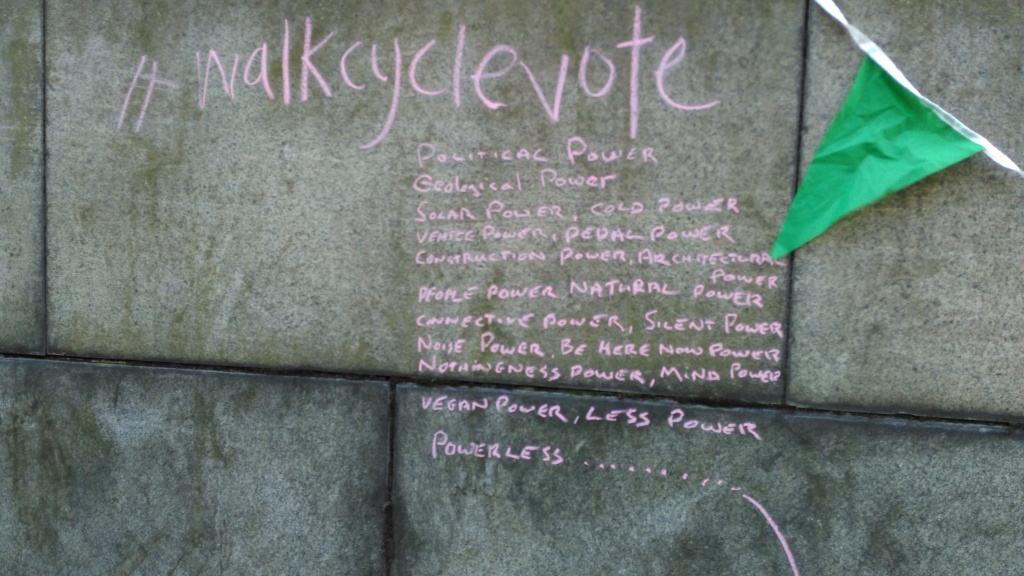 Six organisations, all part of the We Walk, We Cycle, We Vote collaboration, spent the very cold afternoon day dreaming with people about how our cities could be different. We didn’t change the world but we had conversations with passers by about not using our capital city streets as a parking lot, we chatted to the St Andrews House inhabitants about placemaking and punctures and we talked to each other about how we could work more together, sparking a few more fires that we hope will turn into a convincing blaze that people will see, feel and want for themselves and their communities. 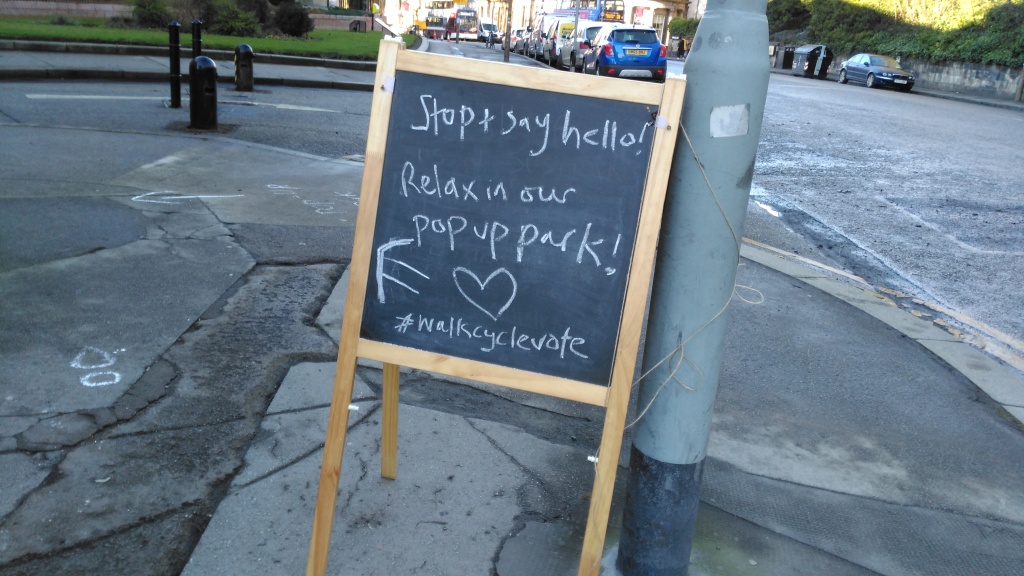