Thrilled by my son’s newly acquired pedal power, and feeling confident after our initial adventure to a local cafe with friends, I felt we could get to East Links Family Park on four wheels (six if you count the trailer) without inviting disaster. It is just less than three miles from our house and Husband was on standby at home, dealing with unending DIY, in case of mechanical failure or histrionics from either cyclist..

Actually getting out of the door is the first barrier, as our cheap and cheerful double trailer doesn’t fit through the doorway onto the steet in the normal way; this means I have to  drag it on its side through the door or assemble it on the pavement in front of an audience. Neither is elegant, although at least assembling in the courtyard and dragging it through the door means no-one sees how long it takes me to fit two wheels to a trailer..

Finding the fossilised remains of the repeatedly requested ham sandwich from our last outing in the trailer reminded me to learn from my mistakes, so I prepared a round of ham and cheese sandwiches to fend off unnecessary complaining. If only everything in my life could be placated with a savoury snack.

The next challenge was attaching the new Islabike to the trailer, which was solved by a bungee cord from the Dunbar Pound Shop and my own ingenuity (I don’t have much of this so was very pleased with the result). 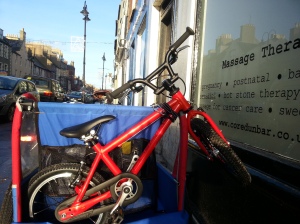 And then we were off! We had covered less than a mile when it transpired that I have created a backseat cyclist; behind me I heard a shout from the trailer ‘use your brakes Mummy, so you can slow down’. At least it shows that he’s listening to me, even if he ignores all the advice.

Halfway through our journey I decanted the Islabike and rider onto the lovely path behind Belhaven Bay, which forms part of NCN route 76, to admire the view and get some pedalling done. I confess I parked my bike to allow me to ‘run and hover’ beside my son as the path was icy and I’m a risk adverse control freak mother. He’s also slightly too short to mount and dismount with ease so we practised using the brakes and tilting the bike to help him get on and off without falling. 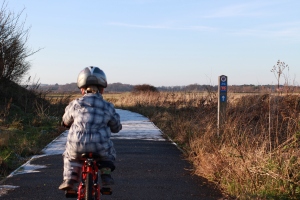 Back on the trailer, Islabike safely hitched, we went on our way and emerged back onto the main road. Here there is only fading paint, and the hope that drivers will show some restraint, to keep us safe. I noticed the need for car drivers to park outside their houses is prioritised over the safety of active travellers. I’m no road engineer but I suspect something could be done to improve this: 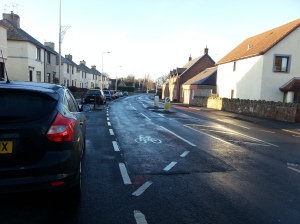 Arriving at East Links on this sunny, crisp and beautiful day it was sad to see that we were the only bikes parked outside. Admittedly their cycle parking was rudimentary, but it probably isn’t the primary factor in preventing families from cycling there. Travelling home I felt the ever present spectre of slightly irritated car drivers pressing us to move faster or move over (I can’t do faster and there is only so ‘over’ you can do on a narrow road with a wide trailer) before accelerating past us. It makes me shudder to think that our lives are so often in other people’s hands.

But, as always, the pleasure of the journey outweighed the challenges. Instead of a few minutes in the car, we spent a lovely couple of hours together, my son improving his co-ordination and balance whilst I was again awestruck by the loveliness of where we are privileged to live. And I got to fondle a whole load of gorgeous goats.

2 thoughts on “Getting from the gate to the goats..”